First exercise of the series about 1 v 1 duels entirely performed on the rhombus.

This first exercise has the goal to coach the attacking phase, trying to finish as fast as possible, under two different types of pressure of the opponent, depending on the development of the move:

An important variation is the chance for the center player to decide which is the teammate in possession.

The receiver may now be the closest side player, or the other one on the farthest cone; this way the distance and the space the defender must recover is different. Consequently, the time available to the attacker for the conclusion is different. 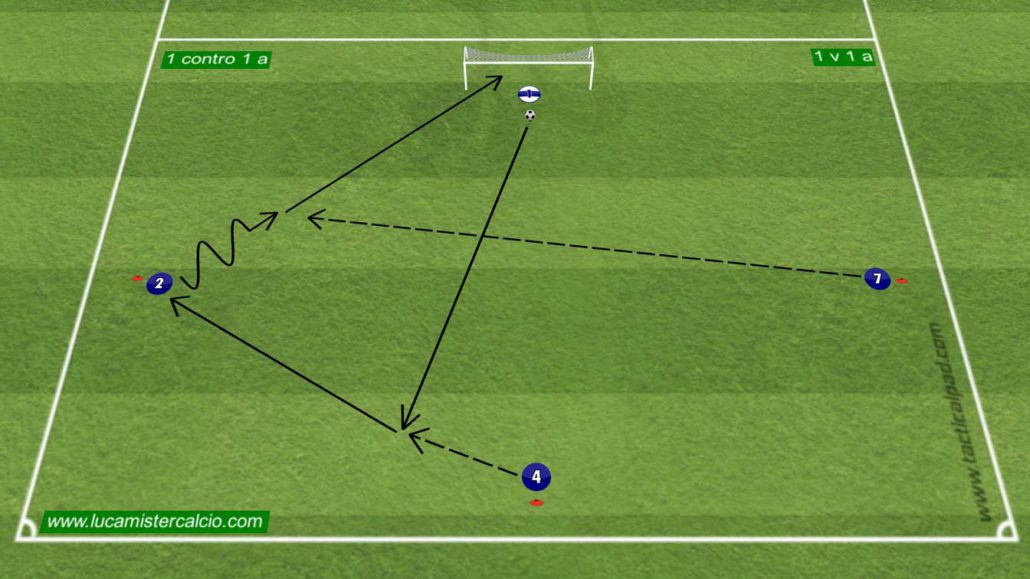 The goalkeeper passes the ball on the run of the center player (4), and this way, even the player in possession (2) and the defender (7) of the 1 v 1 duel are decided.

The defender must recover and close the space between the forward and the goal to prevent him from shooting.

If the defender recovers the possession, he must play with the center player and to finish after the return pass.

The defender (2) is now marking the forward on, without the ball at the beginning.

Variation: the center player decides who has the possession between both the other two players, regardless of the side in which he runs to receive.

PLAYER TACTIC:
Feint, Free from the marker; Mark the man on, Interception